Barbarians at the gate

It’s a little-known fact that Robert E Howard (of Conan fame) invented the literary genre of Sword’n’Sorcery – or Heroic Fantasy if you prefer. As a keen young writer for the 1920s boy’s adventure magazines he tried his hand at any manly genre that he could sell a story in. You can try his collections here, of which I prefer his historical fiction during the Crusades. I’m not sure if he’d gotten hit hard at one of his regular fight club nights at the local meatpacking plant or was divinely inspired but he had a gem of an idea. Why not combine the historical actioneers of Sabatini and Dumas, tales of dashing derring do, with the supernatural horrors of Lovecraft and Stoker? The modern fantasy was born and Solomon Kane it’s first hero.

“It hath been my duty in times past to ease various evil men of their lives – well, the Lord is my staff and my guide and methinks he hath delivered mine enemy into mine hands.” – Solomon Kane

As the genre gained popularity it finally produced it’s killer app – Tolkien’s The Lord of the Rings. I personally find the Tolkien brand much too beardy and verbose. It’s like the creation of an alternate universe with it’s own mythology has superceded the purpose of telling a crackingly good story. Once Tolkien tilled that soil we’ve had to put up with ham’n’eggers like Robert Jordan and the ilk producing multi-volume sagas without crossing out a single sentence in their life. Ah well, at least the occasional George R Martin and Brian Lumley dragged themselves above such dross.

But I digress. The most interesting side to LoTR is it’s real-world inspiration. Compare the map of Middle Earth with the real globe*

The Shire is middle England, probably Kent. Here dwell delightful little Hobbits who are blissfully unaware of the real dangers of the world. Major drama in the Shire is when the Sackville-Bagginses steal your best turnip before the Flower Show. The narrative arc of LoTR is three Shire natives being pulled into an adventure across Middle Earth where they eventually see the world for what it really is – very dangerous.

The Elvin paradise of Rivendell is Scandanavia, a last bastion of an elder race shrinking under outside pressure as the population seeks to escape West (to the USA). Like the real world place it is crumbling under outside assault and the great genetic lineage being corrupted and dying out. Heading south we get through Germany and France (Rohan) which are the industrial and cultural centres of Middle Earth where real men live until we get to the outer perimeter of the world of men, Gondor. The two towers are Israel and Istanbul, last outposts against the malignantly evil orcs. From even further south (Africa) come the dark-skinned mercenary armies to aid evil against the Men.

Pretty striking parallels really. It’s no surprise in the movie that all the good guys have white skin and the bad guys are all dark orcs. When the Hobbits finally return to the Shire they feel alienated. They can’t unsee the world as it really is, they can’t go back to the blissful ignorance of little Englanders. They know that Hobbits can only live their rural ideal because the rangers patrol the hinterlands and a deadly struggle of border defence is raged thousands of miles away, completely out of the sight of those who chose not to know.

“People sleep peaceably in their beds at night only because rough men stand ready to do violence on their behalf.” George Orwell.

Thus considered, LoTR is a prescient takedown of the progressive/liberal alliance that seeks to destroy England. The Islington socialists are Hobbits (and in Polly Townbee’s case, she really is dumpy and hairy) who willfully refuse to recognise the structures that need to be in place to insulate Western European civilisation against the barbarians at the gates. Like the Hobbits, they even mock the rangers that keep them safe, putting on airs and graces. I’ve travelled to Istanbul and personally witnessed the eddy and flow as the tides of Islam push against the frontier of civilisation. I’ve read the history of the crusades. I know about the siege of Vienna.

And thus I have undying respect and gratitude for those rough men that protect the life I hold dear. God Save The Queen.

* The point is even more obvious if you consider the first ever Heroic Fantasy kingdom by REH. Conan was born in Newcastle, near the Picts of Scotland. Aquilonia is France, Zingara is Spain, Stygia is Egypt, Kush is Nigeria, and so on out East. 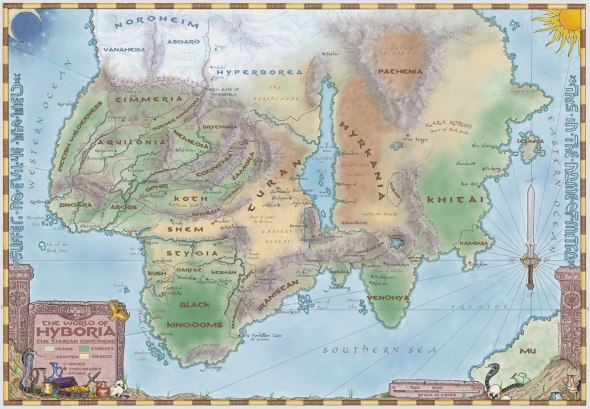 This entry was posted on September 5, 2012 by countcervantes. It was filed under Uncategorized .